At the beginning of the Corona crisis, nuts and dried fruits were among products that were hoarded most. In the meantime, the market has stabilised to a certain extent, says Jens Borchert, managing director of Palm Nuts & More and major supplier to the domestic food retail trade. 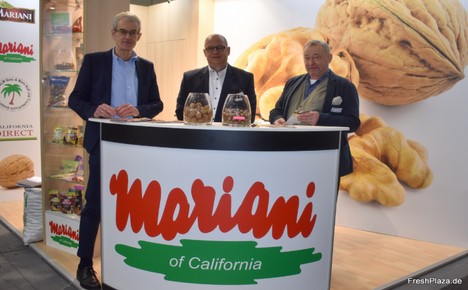 Joachim Alkewitz, Bernd Hofmeister and Jens Borchert during Fruit Logistica 2020. Palm Nuts & More LLCKG is one of the permanent exhibitors at the world’s leading trade fair.

The exceptional situation was also noticeable in the daily routine of the nut and dried fruit importers based in Buchholz in Lower Saxony. “We now work in two teams, partly in the office and partly at home. Since we are a service company and we do not store or handle any goods ourselves, the crisis fortunately affects our daily work somewhat less,” Borchert explains. 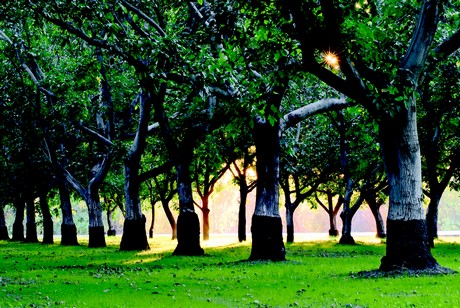 Nevertheless, the Corona crisis is also presenting the nut and dried fruit industry with major challenges regarding the procurement of goods. “The production of dried fruit from Turkey has become more difficult in some cases. Personnel restrictions lead to lower production capacity. But also from other origins, some containers are not arriving as planned because the ships are not running on schedule.

Fortunately, the authorities in the EU have reacted quickly, taking measures to ensure that, for example, border controls for foodstuffs are once again running smoothly,” Borchert says. 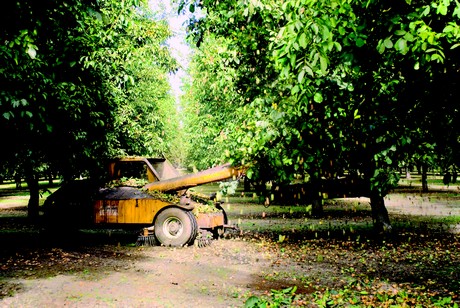 The shortage of harvesters in these times have hit the walnut industry less hard because the walnuts are mainly harvested mechanically. Picture: Harvesting robots during the Californian walnut harvest.

Collapse of prices for almonds and walnuts
In the USA, shipments of nuts were still at a good, stable level. “Nevertheless, we are seeing considerable price drops for both almonds and walnuts. The current price for almonds is around $2.20 /pound, in January the commodity was still trading at $2.80 /pound. Walnuts in shell with a commercial calibre of 32+ are now marketed at $1.00/pound compared to $1.25/pound before the crisis.” 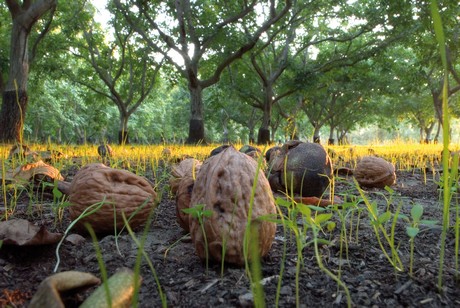 Nuts (here: Californian walnuts) and dried fruits form the core assortment of Palm Nuts & More. At the moment, during Ramadan, dates are in great demand. Borchert: “Here, we mainly offer the Deglet Nour variety, which we purchase from various North African countries, depending on their availability.”

Smaller walnut harvest in Chile
Usually, the walnut harvest in the important California growing region starts at the beginning of September. Borchert: “Harvesting is currently taking place in Chile: A total tonnage of 120,000 tons was expected this year, but current expectations are that the yield will be 90-95,000 tons. In addition, Chile is normally known for the large-sized goods (32+). However, the share of this commodity will also be smaller this year.”

Euphoria over for now.
All in all, according to Borchert, the sales volume is at a good level: “At the beginning of the crisis, the market for nuts and dried fruit showed high growth rates. Slowly but surely, we have the feeling that the situation is calming down again to some extent. The great euphoria we saw until a few weeks ago is now over for the time being, as the supply chains for our products and countries of origin have been largely maintained and stock levels have eased somewhat.”